You are here: Home / 7th Pay Commission News / PBOR TABLES – Revision of pension for PBOR discharged prior to 01.01.2006

Subject: Implementation of the Government decision on the recommendations of the cabinet secretary’s Committee- Revision of Pension in Respect of Personnel Below Officer Rank (PBOR) Discharged prior to 01.01.2006. 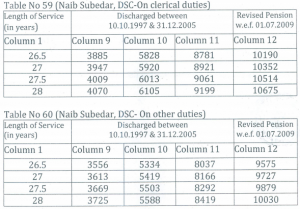 4. The above amendments shall take effect from date of implementation of their respective orders. Arrears in affected cases shall be released by pension Disbursing Agencies.

(Manoj Sinha)
Under Secretary to the Government Of India