There are Two options have been given to Pensioners

Option No.1 . The existing Pension may be Multiplied by 2.57

Option No.2 . The Pay Scale on their retirement and Number of increments they earned to be taken for calculation

After calculating the Basic Pension from the above two options, they can choose whichever is beneficial for them

Multiply your Your Basic Pension with 2.57

In Seventh Pay commission your Pay Matrix Level is 11

your index number in that Particular Pay matrix Level 11 = 10 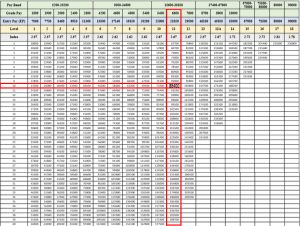 50% of this Pay will be fixed as your Basic Pension

Those who are retired in Sixth Pay commission regime would be aware of their increment and Pay Band details. It will be easy for them to calculate their Basic pension in VII Pay Commission using this matrix.

For others it will be very difficult to find out their Pay scale and quantum of increment details as of now. Also It will take little time for Concerned Department to verify the Pensioners records to ascertain the number of increments earned in the retiring level

So Rs.32236 will be paid as Basic Pension as Interim Measure

Then Rs.44200 will pe Paid as your Basic Pension