You are here: Home / One Rank One Pension / Now one rank one pension is demanded by retired personnel of paramilitary forces

As widely anticipated, the announcement of one rank, one pension (OROP) scheme for the armed forces has triggered copycat demands by retired personnel of paramilitary forces who are now seeking a similar deal, raising the prospect of the government, already strained for resources, having to shoulder additional financial burden of at least Rs 3,000 crore annually.

Paramilitary veterans, who have always clamoured for parity with armed forces, have decided to hit the street straightaway, and plan to launch an indefinite dharna at Jantar Mantar on November 2, just like the one ex-servicemen took recourse to in order to force the government to speed up the OROP announcement.

Announcing their protest plan to secure OROP and other benefits on the lines of armed forces, All-India Central Paramilitary Forces Ex-Servicemen Welfare Association (AICPMFEWA) made plain its aggressive intent, as well as its bid to capitalize on BJP’s stakes in the Bihar assembly elections, a state which is home to a large number of paramilitary troopers.

“Even a mother would not breastfeed her baby till it cries,” AICPMFEWA national general secretary P S Nair said in an unabashed announcement the intent to flex muscles in the aftermath of the success of the retired defence personnel.

“The time is ripe to act before the heat of Bihar elections rises,” Nair said in a letter asking fellow retired paramilitary officers to join the agitation. 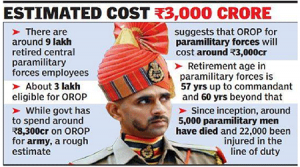 Para Military Personnel demands OROPThe OROP package announced by the Centre for the armed forces is expected to cost Rs 8,300 crore annually, although sections of ex-servicemen are still unhappy. While negotiating with ex-defence personnel, the government had feared that it will have to deal with copycat demands from others too.

“It is a known fact that paramilitary forces are the first line of defence in every security operation, whether it is on the border or internal security. Paramilitary forces are in the war field 24×365 days, while the defence forces enjoying ‘peace time’ comfortably in their well secured barracks. The government is pouring all facilities to them and totally neglecting paramilitary men. We need equal status and equal facilities,” AICPMFEWA said.

Nair’s letter said ex-paramilitary men and serving officers were “more frustrated than ever” since OROP was granted to the armed forces, and a campaign has already started on Facebook, Twitter and at district associations of retired personnel.

“After seeing the feelings of our members all over the country, we have suggested dharna/strike from November 2,” the letter said.

Nine lakh retired personnel of paramilitary forces will give a final notice to the government on September 26.

ITBP officials raised the issue with home minister Rajnath Singh during their meeting in Leh on Tuesday. Singh assured them that he would take up the matter with Prime Minister Narendra Modi.