You are here: Home / Pension News / How far Pension Option 3 alternative to Option 1

INTERPRETATION OF PROPOSED OPTION 3 FOR REVISED PENSION HOW FAR IS IT AN ALTERNATIVE TO OPTION 1 RECOMMENDED BY 7Tth CPC?

The most significant recommendation of 7th CPC is to bring parity between past pensioners with those retiring after 1-1-2016 (Para 10.1.67). A long standing demand of the pensioners, who have been the victim of Modified Parity in the last two decades from 1-1-1996 (5th CPC), has been addressed by the Commission The parity is sought to be achieved by the recommendation of Option 1 for revised pension which provides for consideration of increments earned in the last Level by a pensioner while in service. Recognizing the delay in checking record for ascertaining the increments for implementation of this option, revised pension in the interim phase was recommended to be fixed by multiplying the pension fixed after 6th CPC by MF of 2.57 (Option 2). This option has already been implemented.

While accepting the above recommendations, Govt. had constituted a 5 member Committee under the chairmanship of Secretary (Pension) to examine the feasibility of implementation of Option 1. The Committee in its meeting with JCM on 6th October has suggested an alternative option (Option 3) to overcome the difficulty of tracing record in some cases. It has been indicated in Para 5 of the minutes of the meeting “that the Committee has found that the alternative method of arriving at notional pay in Seventh CPC by applying formula for pay revision for serving employees in each Pay Commission and giving 50% of this as pension to be beneficial to all pensioners in
comparison to the fitment method.”

Dispensation of revised pension under alternative Option 3 will depend on the decision of the Govt on the recommendations of this Committee. The impact of Option 3 as understood from the proposal of the Committee mentioned in above is reflected in the 3 tables indicating the revised pension 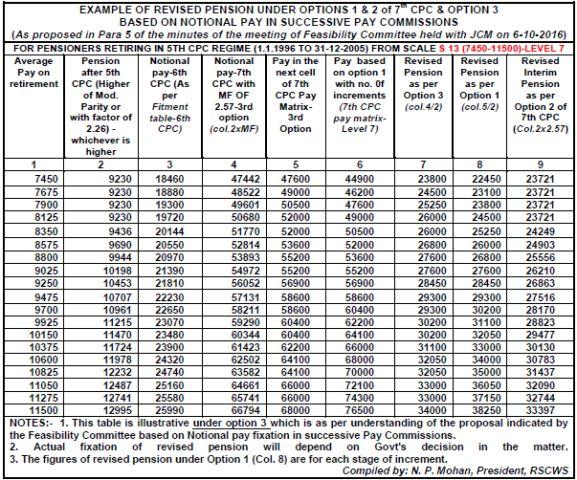