Our waiting for knowing the 7th pay commission recommendation on pay and allowances will come to an end this evening. After that we will be hearing mixed responses from various quarters. If it gives satisfaction to one side and the same will be disappointment to other side.

After presenting the report to Finance Minister P. Chidambaram, Mr. Justice Srikrishna said: “I have recommended something which is good for the nation … the average hike will be 40 per cent.”

The Hindu daily , dated 25-3-2008, has published various reports about the sixth pay commission recommendation. It described recommendation with a title “Bonanza for Central government staff”

NEW DELHI: In a major post-Holi bonanza, the Sixth Pay Commission on Monday recommended an average 40 per cent increase in the salary of over 40 lakh Central government employees and a doubling of most of their allowances that would impose a burden of Rs. 12,561 crore on the exchequer in 2008-09. 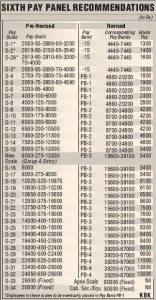 ♦ The Centre of Indian Trade Unions has described the Pay Commission recommendations as “arbitrary, discriminatory and disappointing.”

♦ In a statement issued here on Monday, CITU president M. K. Pandhe said that against the demand of Rs. 10,000 as the minimum wage computed on the basis of the 15th Indian Labour Conference recommendations, the Commission has recommended only a paltry Rs. 5,740, while the maximum has been fixed at Rs. 90,000.

♦ The Confederation of Central Government Employees and Workers has described the Sixth Pay Commission’s recommendations as “totally unacceptable” and decided to stage a protest here on Wednesday to “fight for a decent wage settlement.”

♦ In a statement issued here on Tuesday, the Confederation drew attention to the recommendations that were made by them but rejected by the Commission, including fixing the minimum wage at Rs 10,000 a month. The minimum wage recommended in the report was even less than what was suggested in the previous Pay Commission, the statement said.

♦ South Central Railway Mazdoor Union secretary C. Ramakrishnama Charyulu on Monday said that the Sixth Pay Commission’s recommendations had disappointed all the Central Government employees. He said the pay hike recommended by the commission was nothing but pittance.

After submission of the 7th pay commission report we may hear same words but through others voice. Because the leaders might have been changed but voice will be the same . But as we said earlier the recommendation to be submitted today is not final verdict since it is subject to change. Because before 7th cpc report goes to cabinet approval it has to cross various hurdles.